The article in the March 2010 TCS http://sas.org/tcs/weeklyIssues_2010/2010-03-05/feature2/index.html on chemical kinetics inspired me to learn more about the subject. Chemical kinetics is not something that I had encountered in my meager chemistry education.

Basically chemical kinetics is the study of the rate at which chemical reactions occur
and what factors affect that rate. Temperature and for reactions in solutions the concentration of the chemicals involved are big factors. To keep things simple this experiment is investigating the concentration effects at a fixed temperature. Chemical reactions can occur over a wide range of rates from almost instantaneous to many
months or years. Reaction between oxalic acid and potassium permanganate is convenient to use as an educational experiment because it occurs slowly enough to easily observe but not too slow that it would take months to complete the experiment. A dramatic example of a very fast reaction would be burning hydrogen. Concrete setting, which can take years to complete, would be an example of a slow reaction. Knowledge of chemical kinetics has a lot of practical applications. For example designing epoxies with specific setting times.

We have an equation that shows the relationship between rate and concentration but what
we really need for the experiment is an equation that shows the relationship between concentration and time. Rate is the change in concentration per time, often expressed in units of moles per liter second. This is similar to speed expressed in miles per hour, for
example. If we were traveling at a constant speed, the distance traveled can be computed by multiplying the speed by the time spent traveling at that speed. Things get a bit more complicated if the speed is not constant. This is where calculus comes in handy. To further simplify things we will assume one of the concentrations in the rate equation is constant. Then by applying some calculus and integrating the rate equation with respect to time we come up with equations describing the concentration vs. time for the three orders of interest.

The concentration of the reactant is A. A0 is the initial concentration at time = 0. k is the same constant as in the rate equation. T is time and e is the number e. 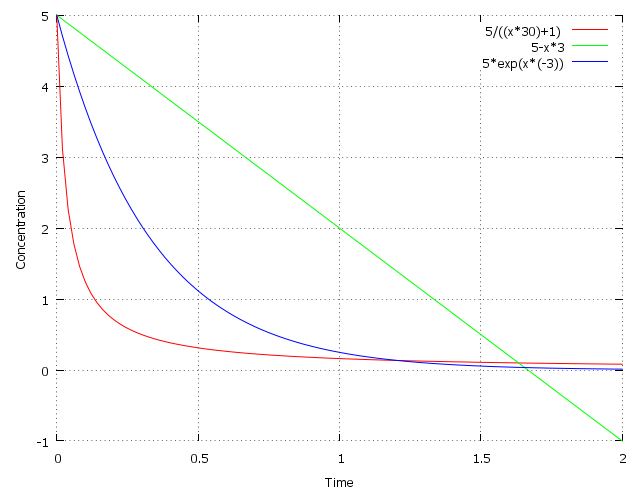 Design of the Experiment

In a future post I will describe the results of my experiment.

This entry was posted in Amateur Science, Chemistry. Bookmark the permalink.