My interest in science focuses on scientific instruments, learning how they work, designing instruments that can be built by an amateur and actually building them. To address the building I have acquired over the years a reasonable collection of metal working tools. I am always on the lookout for an excuse to acquire a new tool. Just recently I needed to cut and bend some sheet metal to build a seismograph. That was the excuse to buy a sheet metal brake/shear.  Sometimes the tools is too expensive to justify or won’t be used all that often. In that case I get tempted to try and build the tool.

A while back I decided to build the Gingery plastic injection molding machine. Years ago I started to build a different machine but it had lots of parts and I got distracted. If you don’t already know Vince and Dave Gingery have written a series of books on building various machine tools, basically from scratch.

I basically followed the plans in the book to build the machine. Of course being an engineer I could not resist the temptation to make a few changes. The plans call for most of the frame to be held together with nuts and bolts. But one connection has to be welded. So I welded all of the frame instead of using bolts. This saved a lot of hole drilling. A chunk of 1″ X 1.5″ cold rolled steel is called out for the heater block. I had a scrap piece of 1″ X 2″ hot rolled steel bar so I used that. Being bigger it allowed me to use two cartridge heaters instead of one. This will allow the block to heat up faster and more evenly. The plans call for a dial thermometer to read the temperature and a mechanical bi-metal thermostat to control the temperature. Since I had already built an electronic temperature controller with digital read out I used that for the temperature control. See https://jimhannon.wordpress.com/2011/02/24/heat-treating/  The sensor for the controller is thermocouple screwed into the heater block. Since the thermocouple I bought was made in China I assumed it would have metric threads and searched all over for a tap to thread the heater block. Turns out the threads were not metric just 1/4-20. 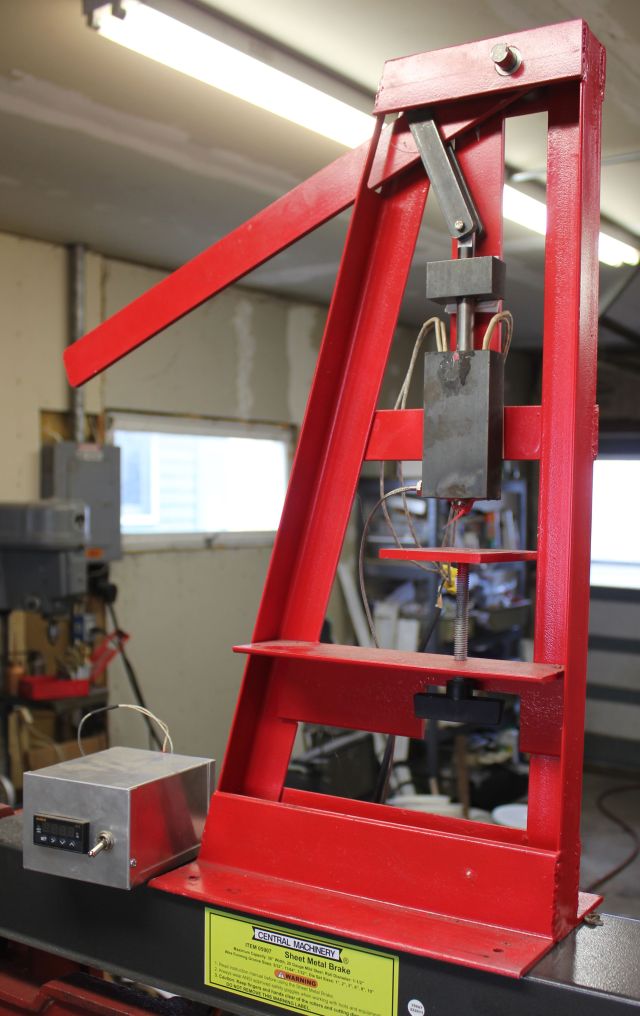 As with any machine it takes some learning to use it properly. First I just tried heating some plastic and squirting it out. This helps get the temperature set right and gives you a feel of how to load in the plastic. I cut some strips of plastic from a milk bottle. This plastic is HDPE (High Density PolyEthylene). One thing I found was the plastic sticks to the injector piston and it gets bound up in the guide block when the machine cools. The next time I started it I had to heat the piston with a torch to get it free.

The book recommends making a test mold to try out the machine so that is what I did. The mold makes some 1/2″ diameter pellets of plastic that can be used to feed the machine. 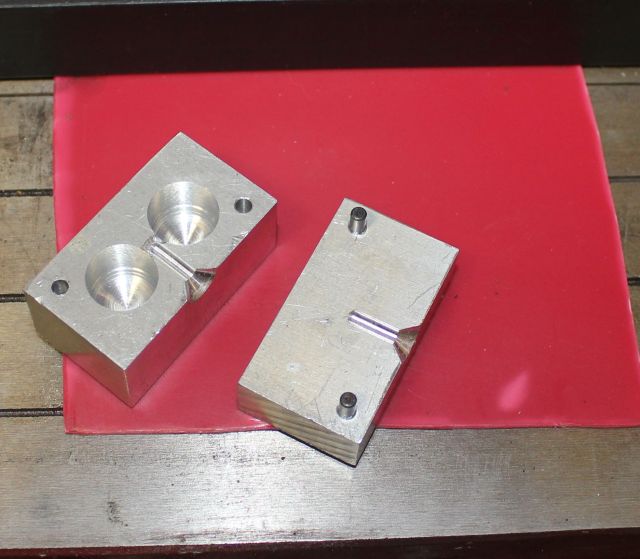 To try it out I cut some strips from the lid of a plastic tote which had no tote to go with it. This plastic is polyethylene. The strips are fed into the top opening of the heater block until the block is filled with molten plastic. The injector nozzle tends to drip a bit when the block is being filled with plastic so I leave the mold off until the plastic is ready to inject. Any drips can be removed just before installing the mold. If you don’t do this the drips will harden in the mold sprue and you won’t be able to inject the plastic.

Above is a picture of the mold with pellets still in in and some pellets still attached to the sprue. I was a bit worried that it would be difficult to get the pellets out of the mold but the plastic shrinks enough that they come out easily.

Coming up in the next post on this subject will be making a mold for something useful.

This entry was posted in Machine Shop and tagged plastic injection molding machine. Bookmark the permalink.