DRO for my MIll

Like most of my blog posts this is not meant to be a “how to” but rather a “how did” in hopes that someone will find useful ideas for their projects.

It has gotten a bit frustrating using my milling machine recently and having to deal with the leadscrew backlash and counting turns to get the table positioned. A digital readout  would make using the mill much easier. A full 3 axis DRO for a mill costs almost as much as the mill. I did not want to spend that kind money for a full 3 axis readout so I found some individual scales and ordered them.

The X axis scale was the easiest to mount to the mill. The front of the mill table has a T slot for adjustable stops. I had never used the stops so I figure I would not miss that function. With the readout is is easy enough to just stop at the correct position. The scale is mounted with some T nuts to the slot on the table and the sensor is mounted to the front of the mill using the mounting holes for the stop. An aluminum bracket and spacer connect the sensor to the mill.

It was necessary to drill and tap some holes into the mill to mount the Y axis scale. In this case the sensor is attached to the moving part and the scale is attached to the base of the mill. It is tucked away under the table mostly out of harms way. 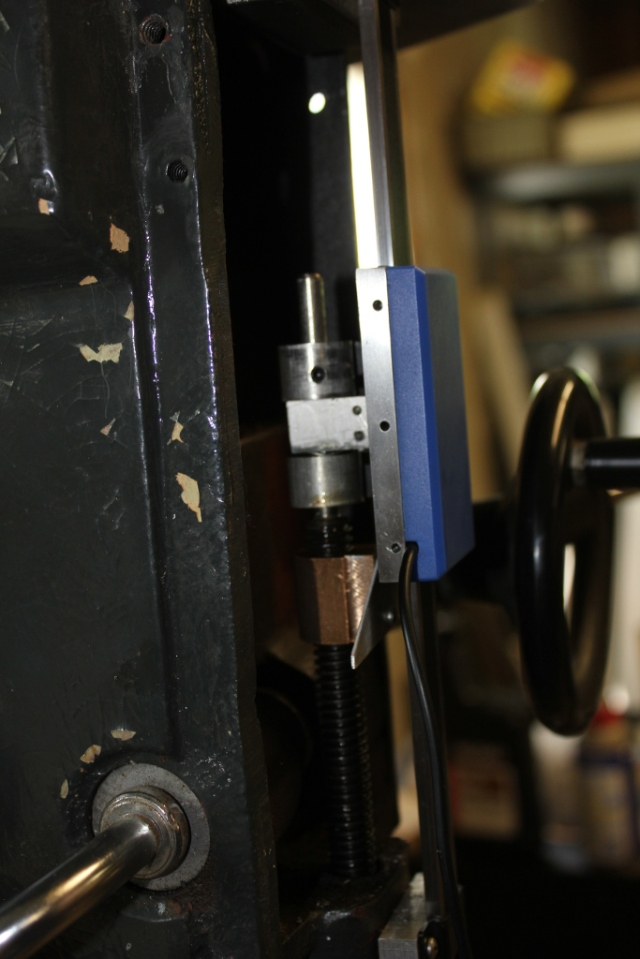 The Z axis took me some time to decide how to mount. I did want to retain the depth limit function for the Z axis as I do use that frequently. The bottom of the scale is attached to the mill with two holes drilled and tapped into the mill. For the top of the scale I used a couple of disk magnets as drilling under the belt guard would have been difficult. The magnets make it easy to remove and adjust and they are up out of the way of any chips that the magnets might attract. I could have used a separate rod to mount the sensor but it looks better with the sensor attached to the depth limit screw. This made things more difficult because the screw still has to turn to adjust the depth limit. I added a wave washer where the screw attaches to the spindle and another wave washer where the sensor is mounted.  This eliminates any backlash that would cause error in the scale readings. The sensor is mounted to an extension of the screw to allow the depth adjust to still function over its whole range.

The original plastic cover was replaced by some aluminum angle. Not really necessary given the digital readout but I added a pointer to the depth limit stop nut and a piece of stick on ruler left over from another project.  This is handy for quick and dirty drilling that does not need to be very accurate. 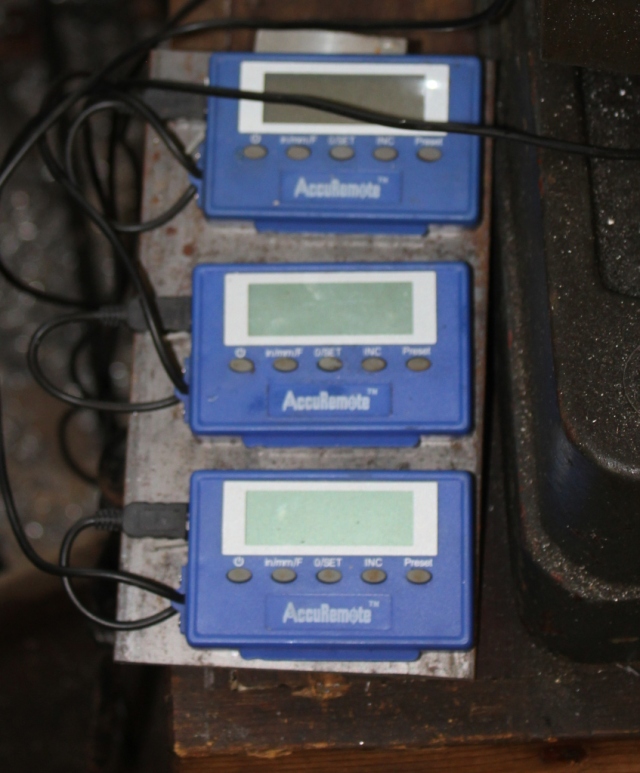 I am still trying to decide how to mount the readouts for the DRO. Right now they are attached with their magnets to a steel plate sitting on the mill table. This is not a very good place for it as the chips fall on it. Many DRO displays are mounted near the top of the mill but I normally sit down to run the mill especially when doing careful work. Maybe not the safest thing to do but it is a lot easier for me to do careful work sitting down.

Recently I discovered information on the web about using an inexpensive android tablet for a DRO readout. This would let my setup have all the functionality of a 3 axis DRO for less cost. That might happen in the future but right now I want to get back to milling.

2 Responses to DRO for my MIll