I was not up to driving over a 100 miles in hope of finding clear sky in the path of eclipse totality. So I decided to make the most of what could be observed at home where we had about a 90% eclipse. Of course it was cloudy.
At my location Longitude: 91,39.26W Latitude: 42,11.90N the eclipse timing was about: start 11:45, max 1:12, end 2:36. There are a number of atmospheric sensors logging data here and it is interesting to see what effect the eclipse had on each of them.

The most obvious thing to look at was the sunlight intensity. This is a plot from my pyranometer which records the total visible light intensity of the sky. The red plot is the calculated intensity for a totally clear sky. The blue plot is the actual intensity. The effect of the eclipse can be seen as the small dip between 12:00 and 14:00. Roughly looking at the plot there is a 10:1 reduction in intensity during the eclipse. The cloud cover stayed relatively constant during that time. Of course just after the eclipse the sky cleared momentarily around the sun. 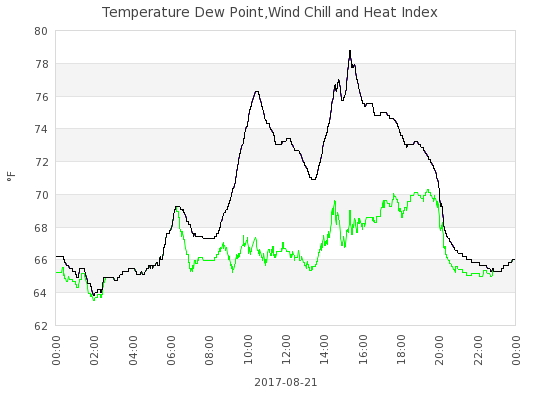 Above is a plot of the temperature and relative humidity. One would expect the temperature to drop during an eclipse and it did. It is hard to tell how much is due to the eclipse but I would say somewhere between 2 and 3 degrees F.

Above is the UV index plot. The dip in the index is quite clear.

Above is the barometric pressure plot. I had read that an eclipse could affect the pressure and there is a dip during the eclipse time. But given how much it is bouncing around, who knows.

Above is the wind speed and direction plot. Nothing obvious here but the speed did drop during the eclipse.

Above is the Geiger counter data. I did not expect to see any effect due to the eclipse. There are however two radon washout events ( the increases around 6:00 and 21:00) due to the rain we had at those times.

Above is about all that I could see of the eclipse through the cloud cover. You can see that the sun is not round.

This entry was posted in Amateur Science, environmental monotoring and tagged eclipse. Bookmark the permalink.