I wanted to take some star pictures with my DSLR and decided a barn door style star tracker would be a fun project to build.

Early versions were nothing more than two boards connected by a hinge with a screw to adjust the angle between the board. One board was attached to a tripod and the other board held the camera. By periodically turning the screw a small amount the camera could be made to follow the stars. Manual adjustment could be eliminated by  using a 1 RPM motor to turn the screw. Using a straight screw leads to errors in the tracking angle for longer exposures. The Trott double arm drive was one effort to reduce the tracking error. The use of a curved screw eliminates the tracking error but requires the nut be turned rather than the screw. I chose to use the curved screw turned by a stepper motor. This way I can adjust the tracking speed in software and reset the tracker with a push of a button.

My design is a bit more sophisticated than two boards but still much less expensive than commercial camera trackers I have seen. I chose to make it out of metal.

Above is the bottom plate that attached to the tripod. It has a 1/4-20 hole in the middle for the tripod screw. Mounted on this plate is a microswitch assembly used in 3D printers. The switch signals the microcontroller when the drive is back to home position.

Above is the top plate that holds the camera. Also on this plate is a dovetail mount for a finder scope used to align the tracker with Polaris. These plates are 1/8″ thick and 3 by 12 inches.

Above is the stepper drive assembly. A stepper motor drives a timing belt pully which hold the brass nut. A ball bearing in the other side of the pully and a hub attach the pully to the plate.

Above is the curved screw. To curve the screw I bent a piece of all thread around a curved surface and matched it to a line drawn to the correct radius on a piece of cardboard. The nuts on the end attach the rod to the top plate. This rod is longer than I expect to need. I just used the full 12 inch piece I bought.

Above is the electronics assembly for the tracker. On the perf board is a Teensy 3.2 microcontroller by PJRC a Pololu stepper motor driver and a Pololu 5V switching regulator. Power from a 12 volt battery connects to the barrel connector and two pushbutton switches control the operation. I don’t have the buttons labeled yet. One is the track button and the other is the home button. Pushing the track button will start the unit tracking. Pushing it again will stop tracking. The same for the home button except homing will also stop when the limit switch is activated. The Teensy can be programmed with the Arduino IDE. I put a hole in the case to allow a USB cable to be plugged into the Teensy for changing the software and possibly controlling the tracker by USB. 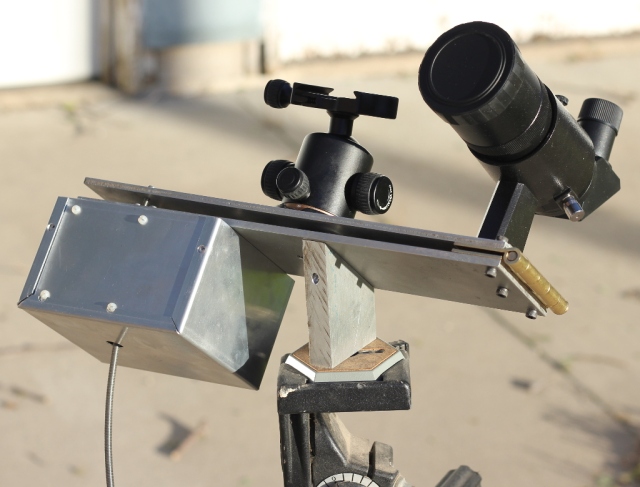 Above is the completed tracker. The curved screw sticks out of a hole in the box. I added a wedge with a 42° angle for my latitude to allow the tripod head to stay mostly horizontal. A right angle finder scope help align the tracker. A ball tripod head lets me point the camera in most any direction. If the finder scope is in the way it can be easily removed after alignment.

Above is the tracker with a camera mounted. I got a F1.8  50mm fixed focal length lens for the camera. This is a way faster lens that the lens that came with the camera. Next is to try it out. I had to take this picture with my phone as my camera only camera was on the tracker.